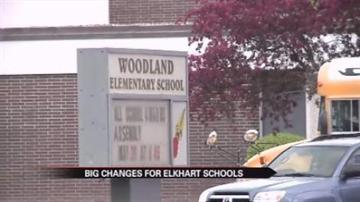 ELKHART COUNTY, Ind. -- Some big changes are coming to Elkhart Community Schools. The district has been trying to find ways to deal with a $2-million deficit and finally came up with an answer - transportation. The district is eliminating ten buses and that is causing several related changes that will affect a lot of students in the district.

"You know, I think there are some pros and cons for what they passed,” said Kersten Peterson, PTO President for Woodland Elementary.

Peterson was the only parent we spoke with who expressed lingering concerns about Elkhart Community Schools’ newest resolution.

"I have a kindergartener who is starting school next year and I think 7 hours is a long time for her to be in school,” said Peterson.

For the 2013-2014 school year, elementary schools in Elkhart Community School District will begin at 8:45 in the morning and end at about 4 in the afternoon.

School will begin at 7:30 in the morning and end at 2:45. That's 10 minutes shorter than the current schedule.

By staggering the secondary and primary school schedules, the district hopes to eliminate 10 buses next year and possibly even more.

"In Elkhart we had a two tier system where our elementary day was inside of our secondary day and it caused some inefficiencies in transportation,” said Robert Haworth, Superintendent of Elkhart Schools.

To optimize the new schedule, the district has also rezoned 11 of the 14 elementary schools.

Some students will be going to different elementary schools next school year.

That's where the district has received most of the push back from parents.

"I think people are nervous, but I think they have a lot of faith in the school district,” said Haworth.

There's also a 2-year moratorium on buying new buses for the district.