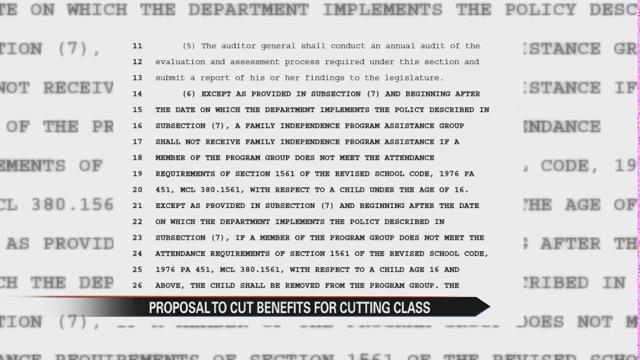 Al Pscholka has sponsored a bill in Michigan that would cut a family's welfare if their child cuts class.

The Michigan House of Representatives has to approve a couple of changes in the wording of the bill but after that it will be sent to Governor Rick Snyder's desk.

People have coined the bill the "Parental Responsibility Act."

Tamira Madden used to receive cash assistance through the Family Independence Program, and she said as a single mom with four kids, she can't imagine not having that income.

Madden said, "So now we're going to lose our benefits because they don't want to get their butts up and go to school? That's just wrong.”

Madden said she wishes legislators would seek out other options before penalizing an entire family.

Madden said, “I think the system sucks. The way they're trying to do people now, I mean we can't whoop our kids and send them to school but they want to take our assistance, or they want to lock us up, because we're trying to teach our kids better.”

Via a Skype interview, Pscholka said six or seven things would have to happen before a family's money is taken away.

Families in Michigan who are on assistance receive a check for an average of $420 a month according to Pscholka.

Pscholka said, “This is not a permanent elimination of benefits. There is an opportunity for folks to make this right. If they attend school for 21 consecutive days, they can get back on the benefit.”

Pscholka said this bill affects families with children under the age of 16.

Some Benton Harbor residents support it.

Diane Houston said, “All kids need education, without education you can't do anything so if you don't send your school or make them go to school, why should you be able to get free money?”

On Thursday Benton Harbor School interim assistant superintendent of curriculum shared her opinion on the matter.

Kristine Simons said, “It's one more layer of protection, and the aim is to hold parents accountable. My concern is in the state of Michigan, there is no consistent definition of truancy.”

Simons said she sees some flaws in the bill and wishes truancy was defined statewide.

Simons said, “So many issues that the families are already facing, to threaten them with taking away their assistance when they need that to feed and clothe their children. Seems like an overkill.”

Pscholka said local districts will be able to decide how many days a student can skip before cash is taken.

This may change soon pending a bill in the senate. A concerned father said he has a problem with that.

Larry Sims Jr. said, “The bill says regularly. What does that mean? One day? Two days? Three days? Half a year?”

Sims said by taking away welfare cash, it only encourages crime among young adults.

Sims said, “They're grooming children for prison. The budget for prison is already out of their hands, so why are they taking money from the poor people again?”