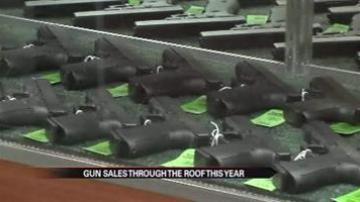 MISHAWAKA, Ind. -- More guns were sold this Black Friday than on any other day in U.S. history.

This year's gun sales set a new all-time record high and just one week after the biggest shopping day of the year, above-average sales remain steady.

The latest numbers from the National Shooting Sports Foundation released this week say gun sales are through the roof.

Midwest Gun Exchange General Manager Brad Rupert said business has been so good since the election that the store was not sure what it would be able to get in stock for the holiday sale, so retailer decided not to do its normal holiday advertising this year.

This Black Friday the biggest lines were not just at Best Buy and other major retailers. Midwest Gun Exchange in Mishawaka, along with gun stores around the country, had customers lining up at its doors with little to no advertising.

"I truly thought there would be five or 10 people out there and then when we opened the doors and people started flooding in, it was just amazing," said Rupert.

Within an hour of opening, the store had more people in it than its ever had before.

With every firearm sold a federal background check must be done, but on this Black Friday so many firearms were being sold that the FBI's National Instant Criminal Background Check System crashed.

"The phone center crashed and we could get a phone call through for an hour," said Rupert. "After that we would receive a message stating call back later."

By the afternoon the phone system was working, though there was a 20 minute wait before retailers could reach an operator.

Even though the system was down for close to two hours, stores around the country saw record-breaking sales.

Over 154,000 point-of-sale background checks were done this Black Friday. That is 20 percent more than the previous high of 129,166 set on Black Friday last year.

Of the top 10 highest gun sales in a day, five have been on Black Friday, but retailers do not think the holidays are the only reason sales are up.

"Typically this volume of increase is based off election results or a natural disaster," said Rupert.

Despite how good the above-average gun sales are, local retailers say its spreading them thin.

"Getting guns and ammunition has become more difficult, so some wait times may be a little longer than normal," said Rupert.

So, if you missed the rush, Santa's pack may not have you packing heat this Christmas.

The record-breaking gun sales were unexpected, mainly because of the spike in sales after the election.

Yet, that is what gun owners think is keeping sells up. However, local retailers hope that is not the case and that this spike in business is not short lived.