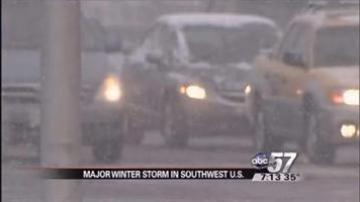 UNITED STATES -- So much for dreaming of a white Christmas.

It's turning into a nightmare for folks in the Southwest.

The weather has already been blamed for several deaths.

Things have become so bad that officials have shut down several major highways.

"It went from rain to sleet to snow. And by the time we hit Kansas it was really crazy. I slid off in the median. Was there for several hours. Took me three hours to get 30 miles,” said Wendy Peeples, a stranded driver.

Blizzard warnings are in effect across parts of those states, and as the system moves east, the snow is turning to rain, Which could also cause some holiday travel problems.