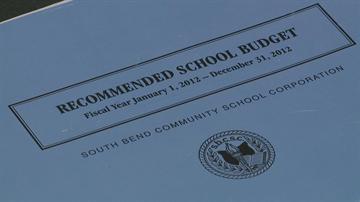 SOUTH BEND, Ind. – In a five to one vote, the South Bend Commnity School Corporation Board of Trustees approved a budget reduction plan that will make $15-million in cuts for the corporation on Wednesday night.

For around one year the corporation and the board have been debating how to make up for an over $10-million budget shortfall caused by a drop in state funding and the loss of students due to Indiana’s private school voucher program.  Among other things, the budget reduction plan calls for eliminating 80 general education teachers, 16 special education teachers and closing schools.  While the overwhelming majority of people at the meeting held the opinion that the budget shortfall had been caused by the actions of the state legislature, how to make up for it was a hotly debated topic.

Parents, students and school staff packed the meeting room on Wednesday night trying to convince the board not to cut school programs and staff positions many claimed to be essential.

"Please take this time to think about what this would do to our students," stated Washington High School Student Advocate Shawn Henderson.

The budget reduction plan lists student advocates as one of the jobs that could be cut to make up for the shortfall.  Henderson explained that he believed the student advocate job to be essential for students.

Alongside Henderson were students who pleaded for the board not to cut college preparation programs and some staff members begged the corporation not to privatize school nurses.

Some board members also protested some of the proposed cuts and attempted to have the board vote on each item individually.  But, a majority of the board voted down the idea, Board President Roger Parent said it was unlikely that the board could approve of a plan that everyone agreed with that would also make enough cuts.

"It's not easy, we've been working on this for a year and as you could tell from the audience there's no consensus there either as to what we should cut," Parent explained.

The board voted to approve the proposed reduction plan.  Superintendent Dr. Carole Schmidt said that while she didn’t agree with some of the items on the chopping block the vote was necessary to move forward in making tough decisions.

"I think that at least we've set the stage for how we can begin to address the $10-million deficit over the next two years,” Schmidt explained.  “Which I think is important."

Moving forward Schmidt explained that the corporation would wait and see how many teachers retired, which would reduce the number of teachers who would have to be fired.  The corporation will also conduct studies to determine which schools can be shut-down.