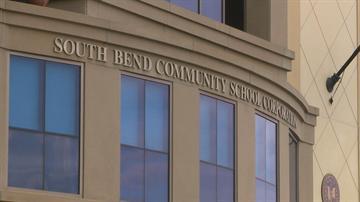 At Wednesday night’s board meeting, a plan to make major budgets cuts to make up for an over $10-million deficit was approved.  Board members blamed Governor Daniels’s policies for the corporation’s budget problems.  Daniels was in South Bend on Thursday and ABC57 asked him for his reaction to the board’s criticism.

“When they stop spending 40-cents of their school dollars outside the classroom on administrative costs and support, when they begin to show some attention to real efficiency then I think they’ll have a stronger complaint,” Daniels responded Thursday night.  “It’s just passing the buck when you’ve done a poor job yourself.”

On Friday board member Bill Sniadecki gave his reaction to the governor’s statements.

"I think he's trying to pass the buck, he's the one who is sitting down state with a half a billion dollars of our tax payer money,” Sniadecki responded.  “A lot of that was supposed to go towards education."

The state has discovered hundreds of millions of dollars allegedly misplaced due to accounting errors.  Sniadecki said he believed some of that money could be put towards relieving budget problems for schools.  He also shot back saying Daniels may have overestimated the corporation’s spending on administration and support and underestimated the importance of those two departments.

“If he’s counting every support staff we’ve got, social workers and counselors and stuff in the schools,” Sniadecki said.  “That’s a necessity especially in a public school.”

He also took exception to Daniels claim that the state has regularly boosted education spending.

“Our budget has been decreased every year, so I don’t know where he’s coming from,” Sniadecki explained.  “Every year we make out a budget and then he comes along and cuts our budget by several million dollars."

Sniadecki did admit that in the past there may have been too much spending on administration by the corporation, something he said they’ve worked to fix.  But, he said Daniels and the state legislature are not blameless for the budget problems, claiming they continue to mandate new educational programs but don’t allocate increased funding to pay for them.

"I guess we're all to blame one way or another down the line,” Sniadecki said.  “He needs to accept the fact that he's the beginning and he's the end of our kid's results in education in the state of Indiana."

The budget reduction plan approved on Wednesday calls for around $15-million in cuts from 2012 to 2013 that could mean layoffs for teachers, eliminating programs and shutting down schools.  The decisions about what exactly will be cut have yet to be made.