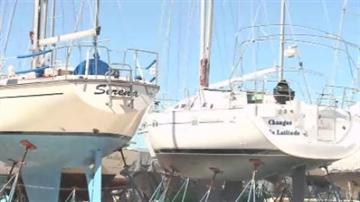 BERRIEN COUNTY, Mich. -- Thousands of dollars have been set aside for dredging to make it easier for boats to navigate the St. Joe River to Lake Michigan. Now boat owners want to know when the project will start – and when it will be done.

"It's about seven feet deep right here and just past the docks there it's 4 and a half feet,” said Adam LaVallee, service manager of Harbor Isle Marina.

LaVallee says that's nowhere near deep enough for 90 percent of the boats in the Harbor Isle Marina.

"Behind us we have a lot of bigger sail boats and some of them have five, six foot keels on them,” said LaVallee.

That means sail boats aren't moving without scraping along the bottom.

"This year I could touch. It's very possible,” said Douglas Rogers, sailboat owner.

His boat needs at least seven feet of water and he's not getting that unless they dredge the sand out to deepen the water.

The Department of Natural Resources denied the original dredging proposal for 54,000 yards because of the fish.

The proposal now includes 11,000 yards of the main channel up past Tackle Haven.

The federal government approved the $550,000 project.

It is supposed to begin in a couple of weeks.

Until then, boat owners are playing the waiting game.

"I'm hoping in May I can launch this boat and if they're dredging and start in April, maybe we'll be lucky this year and I won't have to pray,” said Rogers.