Boats beginning to come out of storage and into the water 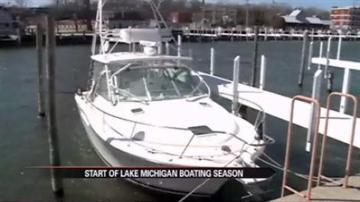 BERRIEN COUNTY, Mich. -- Because it is a short boating season on Lake Michigan, boat owners are ready to get their boats out of storage and onto the water. Monday, workers at Pier 33 began launching the first round of boats.

But April 1st officially begins the 6 week process of getting boats out of storage and tied up at the dock.

"Get them to the hoist, start them up, warm them up, make sure all the systems are functioning right. Then get them safely to the dock so that they're ready for the boat owner,” said Curran.

Curran says this year the terrain will be different for boaters.

"To my understanding this is the lowest that Lake Michigan has been since 1964,” said Curran.

Curran says the lake is down 15 inches from this time last year.

Pier 33 says they dredged their channel last year so it's in good shape.

But if you're hitting the water, it's worth double checking your path.

"Boaters do have to be more careful this season about where they go with their boats to make sure they stay out of shallow areas,” said Curran.