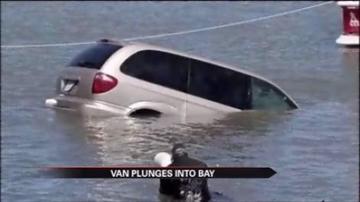 SAN FRANCISCO — A woman's body was pulled from the San Francisco Bay after her mini-van plunged into the water.

There is still no explanation for why her vehicle went into the bay. Police say the woman drove over the median before slamming into the water.

Nearby boaters jumped to help rescue her by trying to break the back window. They were too late.

A close friend says the woman was a diabetic, but police don't know if a medical condition or some other factor caused her to steer into the bay.

Investigators are reaching out to witnesses to find out what went wrong.