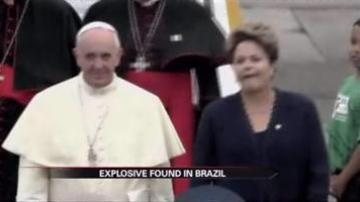 BRAZIL, South America — A small explosive device was found near a religious sanctuary. Pope Francis is scheduled to visit there later this week.

Just hours after the Pope landed in Brazil, military police located the device.  They say it was homemade and appeared to have little destructive power.

It was found in a bathroom next to a parking lot. It was not in the Pope's direct route.