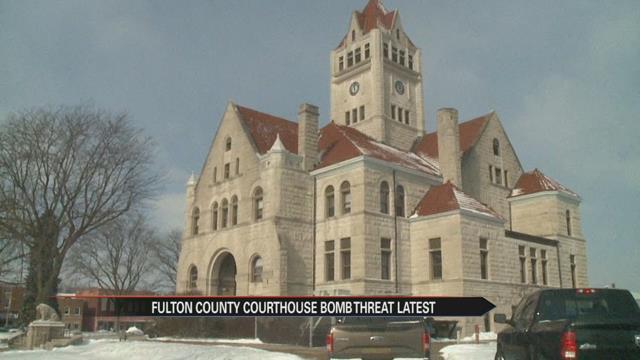 A bomb threat found in the Fulton County Courthouse Monday morning led to an evacuation that lasted more than four hours.

“One lady ran in…ran right to judge and he said something, and then it took a few seconds, and then they kind of looked at it, and then they said everybody has to evacuate now,” Rachel Gutierrez, who was evacuated, said.

Gutierrez was among the dozens of people evacuated from the Fulton County Courthouse Monday morning just after 9 a.m.

“When we came out we had sheriffs, we had undercovers, all that, out here watching everybody,” Gutierrez said. “And finally, they came back out and said it’s not gonna be open for a while.”

Fulton County Sheriff Chris Sailors said a call came in at 9 a.m. saying there was a possible bomb threat inside the courthouse, so his team responded and evacuated the building.

“We initiated just a preliminary search of the courthouse common areas and the outside, and then, once the dogs got here we did a search of the entire building,” Sailors said.

Two Indiana State Police k-9 units were called in to sniff out any possible bombs, but in the end, the only thing found was the item that triggered the initial threat.

“It was a note that was found in the men’s bathroom on the lower level,” Sailors said.

A note that simply said there was a bomb in the building, according to Sailors.

The courthouse reopened just after 1:30 p.m. – more than four hours after it was evacuated, but Gutierrez said waiting wasn’t the problem.

“Instead of having a officer come and push us out, they just let people go out by their-selves,” Gutierrez said. “And people were just sitting there just like, didn’t understand what they were telling them.”

Gutierrez described the process as disorganized.

“They need to practice on their getting everybody out, cause that was not very good how they did it,” Gutierrez said.

Sailors said the evacuation worked because it got everyone out safely, but he added that the courthouse’s evacuation plan is “basic” and that, “We’re probably gonna review those.”

Police have yet to make any arrests in the incident, but Sailors said they interviewed a few people and are following some leads.