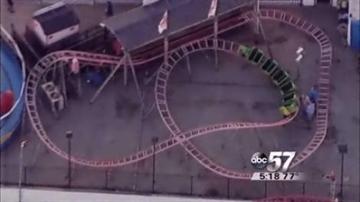 CONEY ISLAND, N.Y. -- A five-year old boy fell from a kiddy roller coaster on Coney Island and broke his leg.

Witnesses say workers at Deno's Wonder Wheel Amusement Park had to pull the boy from the tracks.

The operator, called the Sea Serpent, says the child got scared and tried to get off the ride on the second loop.

"He climbed out of the car at the top of the hill and that's where he fell in between the cars," said Deno's Wonder Wheel Amusement park worker Dennis Vourderis.

The ride is closed during the investigation.