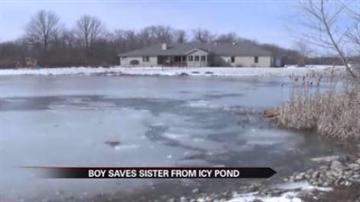 FORT WAYNE, Ind. -- A Fort Wayne boy is being called a hero for helping save his sister from an icy pond.

Eight-year-old Sammy was playing basketball when he heard his sister scream.

He yelled for his dad and ran to the ice to help but then he fell through too.

It was not until their dad reached Sammy did he realize how much of a hero his son was.

The family was treated at the hospital for hypothermia and released.