BP selling $6B in deep water assets in Gulf of Mexico 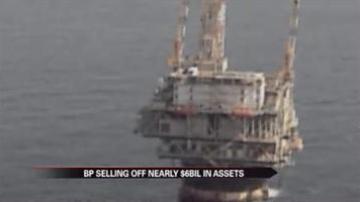 Oil giant BP said it is selling off nearly $6 billion in deep water assets in the Gulf of Mexico.

It is a move that is likely set up to raise money to pay for clean-up costs for the 2010 oil spoil.

BP said it has already struck a deal to sell off some of its oil and gas fields to a Houston-based plains exploration and production company.

And that is just the beginning.

BP hopes to sell $38 billion in assets by the end of next year.

The final cost could be higher if BP is found guilty of gross negligence.