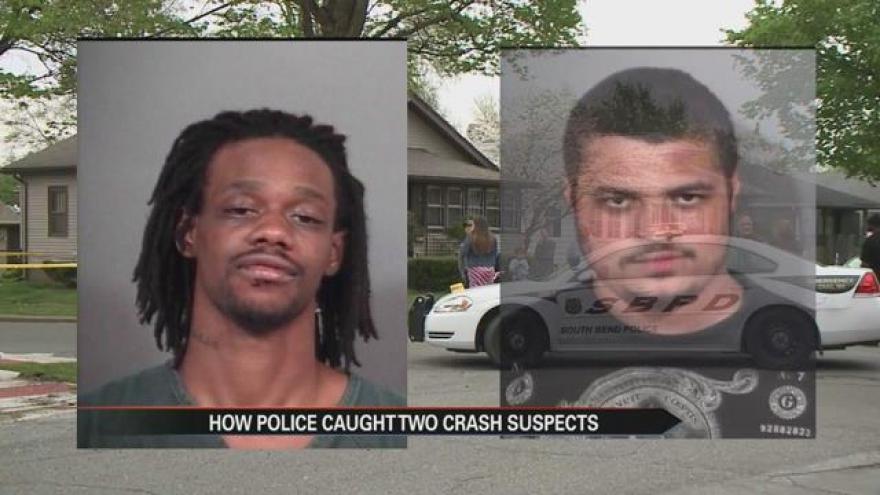 A South Bend neighborhood is slowly coming back together after two separate accidents alarmed neighbors and sent 7 people to the hospital, late Friday afternoon.

Now ABC 57 is learning more about the suspects who started it all and the moments leading up to their arrest.

It didn’t take long for South Bend Police to find their suspects.

After a stolen truck hit a home on High St. and Fairview Ave., and another vehicle around 4 p.m., Friday afternoon, its only two occupants fled the scene but were found hiding inside a South Bend hom just a few hours later.

According to a newly released probable cause affidavit, Green and Lathion approached the truck’s owner, a maintenance worker at the complex, and asked him for room spray.

When the worker, Michael Carpenter, came back to his vehicle, it was too late.

The two had already taken off.

Green was in the passenger seat, and Lathion was the driver.

Just 10 minutes later, Carpenter learned his truck was involved in a nasty accident.

Inside the flipped SUV was a family of seven.

Five of them were children and six were transported to Memorial Hospital.

One of the victims suffered a broken arm.

Just two houses down, an 86-year-old grandfather was on his way to see what was going on before he was accidentally struck by his wife.

His son gave us this update today:

“DEads doing very well just a little bruises and stuff taking a little while to get on feet, both 86 so God bless they’re doing ok.”

Not even four hours later, Green and Lathion were taken into custody.

Court documents reveal police received a tip from Lathion’s father that led them to the home where the men were hiding.

Green was hiding in a bedroom closet while Lathion was found in insulation inside of an attic.

Lathion is charged with three counts of auto theft, leaving the scene of an accident, and possession of a narcotic drug.

Green is charged with auto theft.

All charges are level six felonies.

Green will be in court on May 9th, while Lathion is set for a court date on May 12th.

Both are initial hearings.