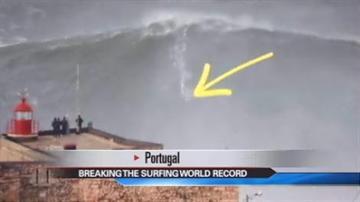 PORTUGAL -- A Hawaiian native may have set a record for surfing the biggest wave.

He even said that he thought his survival chances were very slim because even if he survived the wave there were still rocks that he could have slammed into.

He said he attributes it to a little insanity.

"Well I guess you have to be a little crazy," said MacNamara.

Just for comparison, the waves in California Tuesday were only four feet high.

We won't know if he broke the record until later this spring.