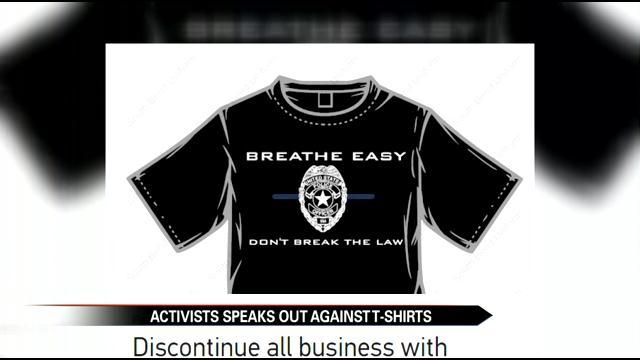 "Breathe easy, don't break the law." Those six words on a simple black t-shirt have some people in Michiana outraged.

“It just seems like something like this does nothing but throw fire onto this problem,” community activist Jedediah Walls said.

Walls first saw the t-shirts Tuesday morning and immediately took action. He posted a petition on change.org asking South Bend to stop doing business with South Bend Uniform, the company behind the shirts.

“I wouldn't want to ban the t-shirts per se because I think that everybody has a right to speech, but what I am asking is that the city have no business with this company,” Walls said.

Walls says it's just a matter of time until these shirts prompt a backlash against local police officers.

“I don't understand how our city could even think to do business with an individual who would put something like that out there about police. It makes the situation more dangerous and that to me is really alarming,” Walls said.
And Walls isn't alone, the petition had almost 200 signatures of support by 3:30 Tuesday afternoon, along with comments speaking out against the shirt's slogan.

“Most of them are talking about how this is outrageous and a mockery, especially of the Eric Garner case, which this is a direct reference to,” Walls said.

The man who designed these shirts says they in no way refer to Eric Garner's death.

"I feel like it's important to get our message out there. You will be able to breathe if you don't break the law and you don't have a negative interaction," Jason Barthel said on Monday.

Barthel is a Mishawaka police officer and man behind the shirts.

But Walls says the slogan does nothing to help our community and our nation come together.

“A lot of people have this attitude of I will do whatever I want and I think as long as that is on the table, we're just going to keep polarizing. It takes people coming together and really talking and really seeing each other as human beings and we need a lot more of that happening right now,” Walls said.

Walls tells us he didn't expect to get more than 100 signatures. He says he will see how far this petition goes and then plans to bring it to the City of South Bend.