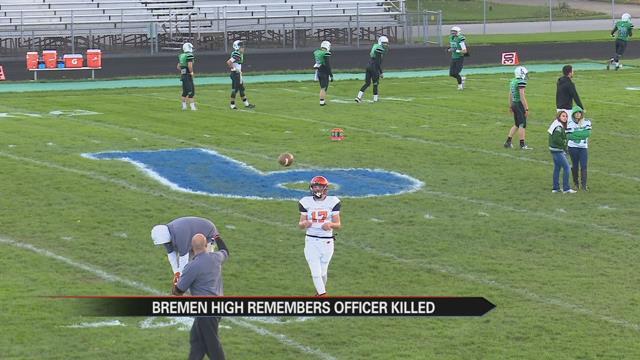 They did so to honor law enforcement, in particular, one officer who was killed by a drunk driver back in 2003.

The grass in Bremen’s ‘B’ is normally white.

But tonight, the Bremen Lions painted their ‘B’ blue to honor law enforcement.

“We all have blue on tonight. It was blue out, even though we’re green,” said Belle Beeson, Chad Beeson’s daughter. He’s the officer that was killed by a drunk driver 13 years ago.

“We’re really appreciative of that. They’ve been behind us the whole year, the whole community, with blue ribbons and signs,” said Bremen Police Chief Brad Kile.

Right around sectionals time 13 years ago, three men were killed by a drunk driver in a car accident.

One of them was officer Chad Beeson.

“It rocked the whole community, and it still does,” said Sandy Moser, who helped to organize the event.

So for the first sectional game of the season Friday, fans honored him and other officers by wearing blue in the stands.

“This was one of my dad’s police uniform shirts that he wore, so it’s just an honor to wear it, bring it out, show it off,” said Belle Beeson.

“It’s a tight knit community, and we’re real fortunate to have their support,” said Chief Kile.

And they love that they’re able to share memories of those whom they say they’ll never forget.

“The fact that the community still remembers him allows me to keep his legacy living on,” said Belle.

Since the 1980s, police have made dinner for the football team the Thursday before the first playoff game.

So, organizers said tonight’s blue out was also a long overdue thank you for those spaghetti dinners.

Plus, Bremen ended up winning the game 35 to 14—another great way to say thanks to the men and women in blue.