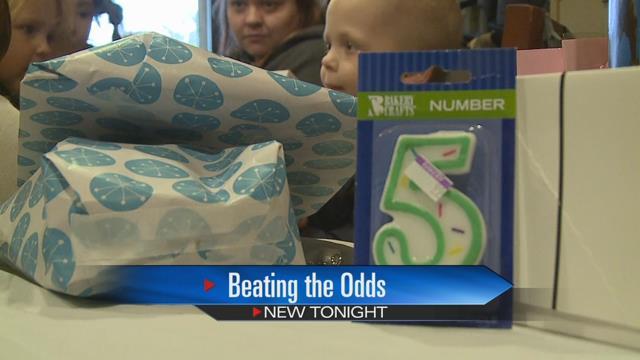 Brent Sheehan may look like a regular 5-year-old eating too much sugar on his birthday but life hasn’t always been this sweet.

“I could see all of his ribs and his spine like within a week,” says Jakie Davis, Brent’s mother. “But his stomach was still really big. The tumor was his whole stomach, it was the size of a cantaloupe. It was huge."

Brent and his family temporarily moved into their second home at Peyton Manning Children’s Hospital in Indianapolis.

Now, she has to deal with a loss of income.

“My leave of absence with work is up in December. So, at the end of December I will lose my job.”

As these troubles weigh on Davis her family’s shoulders, Brent’s birthday party was a time to forget them for at least a little while.

“Ten months ago, we didn’t think he was going have a 5th birthday,” says Davis.

So, as this family learns not to take advantage of the little things like blowing out birthday candles, they also learn it’s their super hero “Xan-Man” that gives them strength.

“We’ll get through it like we do everything,” says Davis.

Brent will go back to Peyton Manning Children’s Hospital on October 12th for 6 months of Antibody Therapy.

The family has a GoFundMe account set up in case you would like to donate to help them with bills and care for Brent: