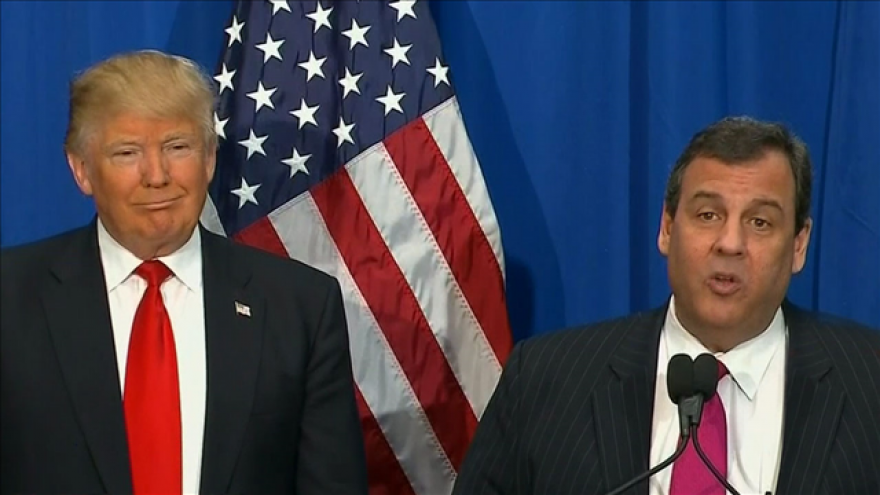 WASHINGTON (CNN) -- With the conviction Friday of two former aides to Chris Christie on charges related to the Bridgegate scandal, the spotlight on Christie is also shining on his role in the Donald Trump campaign -- especially as chairman of Trump's transition team.

The New Jersey governor is in charge of the effort to map out a potential Trump administration and has staffed the transition team with some of his top aides.

Christie's influence has also been felt in donor solicitations for the transition's funding stream, which is separate from the campaign, including a fundraising briefing that was held in New Jersey.

But Christie's ongoing headache from the Bridgegate scandal got more complicated on Friday, when a jury found two former aides -- former deputy chief of staff Bridget Anne Kelly and former Port Authority executive Bill Baroni -- guilty on all counts of conspiracy and fraud related to bridge lane closures that caused massive traffic problems for a town run by a Christie political opponent.

"Rather than just criss-crossing the country and hop-scotching and talking about cleaning up the swamp, he might start by draining his own swamp and asking Mr. Christie to resign as the head of his transition."

Christie has never been charged in the case, though witness testimony during the trial said he knew about the retribution-motivated closures as they occurred. Christie has maintained he had no prior knowledge of the scandal, and called the testimony "simply untrue."

The New Jersey governor was scheduled to make a rare appearance on the campaign trail for Trump on Saturday with planned stops in New Hampshire and Pennsylvania, but campaign spokesman Jason Miller told CNN's Erin Burnett on "OutFront" that those plans were scrapped. Miller would not say whether or not Christie will return to the trail before the election, saying it is up to the New Jersey governor.

The Trump campaign did not respond to a request for comment on the verdict and its relationship to Christie, but he has continued to be a close adviser to Trump throughout the trial.

In December 2015, however, when they were primary opponents, Trump told an audience in South Carolina Christie "totally knew about it," referring to the Bridgegate closures.

How the transition team operates

Multiple sources familiar with the transition say Bagger is essentially running the show. Christie has spent little time in Washington in the past month, with schedule demands including a commuter train crash in Hoboken, New Jersey, in late September and a strong role in Trump's debate prep in October.

On Thursday, Christie called into a fundraising breakfast briefing for the transition held at a Washington law office, attended by industry lobbyists, according to a source in attendance. Bagger was on hand, as was Ed Feulner, former president of the conservative Heritage Foundation think tank who has taken a leadership role in the transition.

The conversation was largely similar to past briefings Christie and the transition leadership have held in DC. The staff of the team has made progress on identifying candidates for key positions in the administration, are preparing a list of potential executive actions a President Trump could enact or repeal on his first day in office, are developing concrete policy proposals to match Trump's campaign pledges, and are working on developing a roadmap for his first 100 to 200 days in office, according to the source in the room.

Another source who has been briefed on the transition efforts says the "skeleton" for the transition is in place. "While the meat's not on the bones, the bones are there, ready to really take off if Trump were to win it," said the source, who is close to the Trump campaign.

While activity and interest in the transition has ebbed and flowed with polling, sources familiar say, recent tightening in the polls have served as a shot in the arm for the effort.

Christie's world is not the only sphere of influence in the Trump transition.

Heritage has been well represented on the effort throughout. In addition to Feulner, former Reagan administration official and Heritage veteran Edwin Meese has been involved in the transition, and the think tank's staff has been helping craft conservative policy positions for a Trump administration.

Trump's top ally in the Senate, Alabama Sen. Jeff Sessions, has also been a top adviser to Trump, and his chief of staff, Rick Dearborn, has been taking a leadership role within the transition.