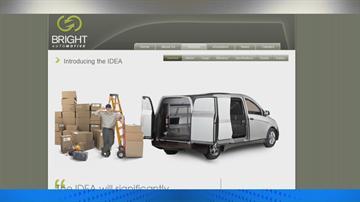 MISHAWAKA, Ind. – Bright Automotive, a company partnered with AM General, announced on Tuesday that they would be winding down operations after unsuccessfully seeking government loans for over three-years.  Bright had hoped to create hundreds of jobs in St. Joseph County.

In a letter to Secretary of Energy Steven Chu, Bright Automotive CEO Reuben Munger and COO Mike Donoughe said that the company had been forced to say “uncle” and shut-down while waiting for government loans.

“We waited and waited, staying in this process for as long as we could after repeated, yet unmet promises by government bureaucrats,” the letter reads.  “We continued to play by the rules, even as you and your team were changing those rules constantly.”

In 2011 Bright announced that they planned to manufacture a hybrid delivery van, called the IDEA, at AM General’s plant in Mishawaka.  St. Joseph County approved tax abatements for Bright to pave the way for $28.1-million in investment as part of the operation.  Officials with Bright said they had companies lining up to buy the vehicles before production even began and planned to hire 300 workers by 2013.

"We had commercial fleets from Fed Ex to Frito Lay to AT&T all saying this is something we can use because fleet managers run their fleets like a business they can see the long term benefit of saving fuel over time," explained Jason Vines, a spokesperson for Bright.  “We had customers lined up, we had the plant lined up, we had the marketing lined up, we had our employees lined up.”

According to Vines, problems arose when Bright applied for $400-million in loans from the federal government.  He claimed that bureaucracy and increasingly complicated regulations from the Department of Energy had Bright stuck waiting for a decision from the government for over three-years.

"We had such a solid business case, we hit every regulation they wanted, they kept changing requirements and every time we went back to them we met their requirements,” Vines described.  “But, at the end of the day it looks like they just didn't want to do this anymore."

Vines explained politics played a role in the government failing to make a final decision.  Even though, he said, Bright would help to meet the goals of producing environmentally friendly vehicles and decreasing U.S. dependence on foreign oil, goals of both President Obama and Former President Bush.

"There's been a lot of political fallout over some of the previous loans and I think they lost their political spine," he guessed.  “As a tax payer, I'm very angry right now and all of our team is very angry right now, we've busted our humps, a lot of people came to the party and worked their tails off and we get treated like this."

Bright will be shutting down operations at their headquarters in Anderson, Indiana and their research facility in Rochester Hills, Michigan in the coming days.  Though there is a possibility the government could agree to give Bright the loans before they shut-down, officials with the company said that is very unlikely.

Nobody with the Department of Energy could be reached for comment.