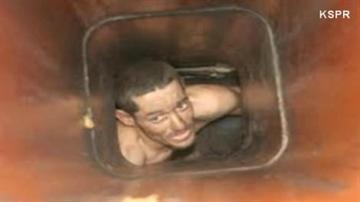 A man seems to have been trying to break into a pawn shop in Arkansas by going down the chimney. He just didn't realize the chimney was sealed off. The man had to be rescued by firefighters.

In the pawn business, Ernest and Marie Raney never know what will come in their shop or apparently how it will get there.

"I never imagined anybody coming down the chimney," said Ernest.

In part, because nobody can come down the chimney; it's sealed off at the bottom.

"We have flowers in it," said Marie.

But if that's not enough of a deterrent, there's this:

"That's ten-and-a-half, inside dimensions," said Ernest as he measured the opening.

The hole is tiny.

Yet, that's where Ernest found Michael Wayne Case one morning.

"I thought, well, a bird or animal was probably in there, so I wanted to go up and check, and when I got up there, it was a person looking up at me, and I asked him what he was doing down there, and why he was trying to break into the building, and he got real violent at that time," said Ernest.

As violent as someone stuck in a chimney can get.

Ernest called 911, and police were a bit surprised.

But along with the fire department, they pulled Michael Case out of his misery -- maybe just in time.

"He could have been in there a long time before anyone knew he was there -- no water, no food, no anything."

The suspect is also charged with resisting arrest. Even though he was surrounded by police, firefighters, and e-m-s, he apparently tried to get away when they pulled him out.