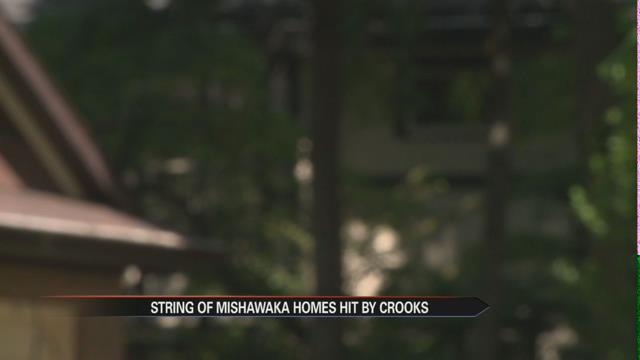 The Mishawaka Police Department is investigating two home burglaries in The Oaks neighborhood.

Jerry, a resident of The Oaks for 60 years, says it as a place with little troubles.

Police say this is not a high crime area, but recently homes in the area have been targeted by criminals.

According to police reports, over the past several days, two homes off of West Mishawaka Avenue were burglarized.

The first occurred on Thursday night on the 600 block of West Mishawaka Avenue.

The thief entered in through a basement window, taking electronics and cash.

Then, Saturday morning, just down the street on the 700 block between 5 and 6 a.m. a man entered a home through an upstairs window.

The woman who lives in that house, was too shaken up to go on camera, but says when she woke up she noticed someone had put items onto her bed.

She got up and started calling out, then she heard a man say, “Don't come back here.”

She called Mishawaka Police, who were there within minutes.

She says she thinks the man was there for at least an hour taking cash, and jewelry.

Now police are asking that neighbors keep their eyes open.

"We need our neighbors to start paying more attention especially this time of year."

Police say they are working to keep the area safe with extra patrols and help from volunteers.

"We have our C.A.P.S. people who volunteer and patrol our area they let us know if anything is going on."

Jerry who is actually a volunteer with Citizens Alliance With Police, says he will be extra vigilant.

"If I see something I sure as heck will be calling it in."

The police department says a good resource is leadsonline.com

Up to 100 items of value can be registered, and it will help law enforcement track down stolen items.

As of right now the thief or thieves are still on the loose.

Anyone with information is asked to call the Mishawaka Police Department at 574-258-1678.