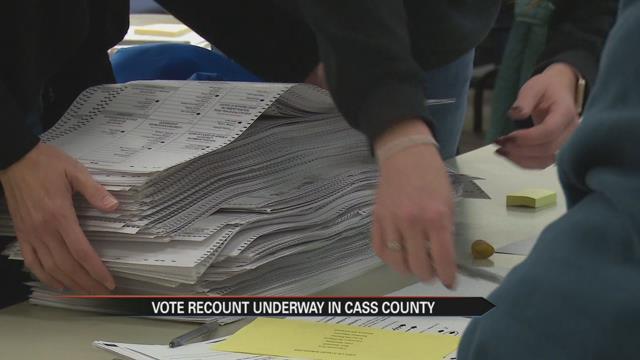 The presidential recount in Michigan made its way to Cass County Wednesday, where workers counted nearly 23,000 ballots by hand.

At that point, Cass County’s recount had been underway for more than four hours.

It wrapped up around 4 p.m.

A dozen teams of two started counting the ballots by hand at 9 a.m.

“They’re residents of Cass County,” Kennedy said of the workers. “Most of them are county clerks or actual election inspectors that worked the election.”

They were assigned to a precinct they did not work on Election Day, while members of each political party stood nearby watching as observers.

“They have the right to question or challenge a voted awarded to a candidate at the time that the recount team is looking at the ballot,” Kennedy said.

Challenges throughout the day were rare, but a blanket one came from the GOP first thing in the morning.

“This morning we were notified that the Republican Party is challenging all of the ballots and all of the precincts due to the Michigan Court of Appeals decision,” St. Joseph County Clerk Lindsay Oswald said.

The Michigan Court of Appeals ruled Tuesday night that the recount, led by Green Party candidate Dr. Jill Stein, should not take place.

But a federal court of appeals said the show must go on.

Once every paper ballot was counted, a board of canvassers came in to certify the results and rule on any challenges.

“I can honestly say it’s been an educational process for everyone involved; the recount members; for the challengers; and even for me,” Kennedy said.

One Green Party member from Kalamazoo attended the recount in Dowagiac Wednesday, but he said he was not allowed to speak with the media.

Democrats and Republicans were a strong show of force, and emotions, at the recount.

“The sooner this travesty ends, the better,” Cass County Prosecutor Victor Fitz, who also serves as an attorney for the Michigan Republican Party, said.

“Had it gone the other way, I think the Republicans would’ve been very quick to jump in,” Hillary Clinton supporter Holly Troeger said.

Fitz voiced frustrations many Republicans feel about the recount.

“Millions of dollars will be spent on a recount that our court of appeals has already said should be stopped immediately,” he said. “It’s really a travesty of justice. And it’s a loss of taxpayer dollars. Every one of these people that are working here, they’re being paid, really, for nothing.”

Troeger voted for Clinton and came to the recount to volunteer as a challenger.

“I believe that if Donald Trump himself was concerned that the voting may have been rigged, then I think as citizens, it’s very important that we pay attention to his concerns,” she said.

Wednesday’s recount was, in part, funded by Stein and her campaign, but the rest of the bill will be covered by taxpayers – potentially thousands of dollars in Cass, Berrien and St. Joe county.

“I think it’s part of our political process and sometimes our tax dollars have to go to legitimize our election process,” Troeger said.

“There’s a real need for Democrats to join the Republicans in this because both parties know how much there’s a need to use our resources for things that are legitimate. This is not a legitimate need,” Fitz said.