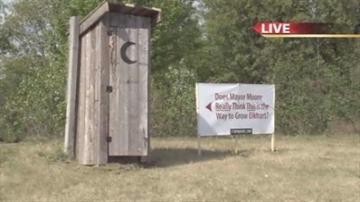 ELKHART, Ind. -- Business owners are blanketing the city of Elkhart with signs protesting the sewer rates for customers outside the city limits. Since the task force’s meetings about the issue are closed to the public, business owners say they don’t have any other way to get their opinions public.

Residents and businesses say the amount the city wants to charge them is unfair.

"We got to just take a stand and that's the reason for these signs. To bring awareness and to bring some positive peer pressure to the table,” said Darin Sorg, owner of Sorg Jewelers.

One of the ways they’re getting the city’s attention is with an outhouse.

"Basically all we're looking for is fair treatment in usage and understanding. We should maybe pay a little bit more, but not the exorbitant amount that we're paying now,” said Sorg.

But the task force meetings are closed to the public, leaving business owners no other way to voice their concerns.

"This is our way to get our story out to the public and general in a fashion as he has gotten his narrative out there,” said Ben Baier, owner of Baier Insurance.

Business owners hope the signs will educate the community and citizens will step in to ask their councilmen to take a stand against the mayor.

The task force has one year to reach a recommendation about the commercial compact agreement but the business owners say that's too long.

The signs are also an effort to speed up the process.