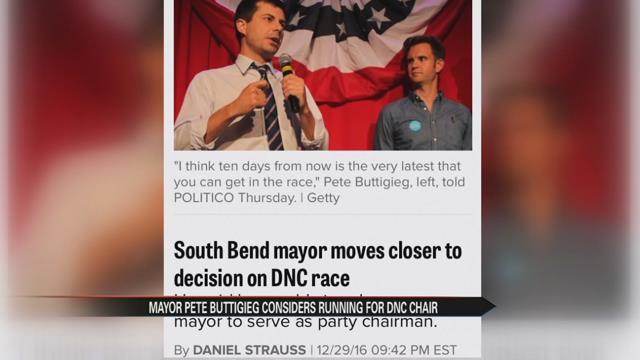 As South Bend Mayor Pete Buttigieg considers running for DNC chair, local Democrats are caught at a crossroads as they cheer him on, but think of the future.

South Bend’s rising Democratic star is weighing his options, leaving Critchlow and other local Democrats with a lot to think about.

“Here locally, you know, we’d obviously be really disappointed to see Mayor Pete leave,” Critchlow said. “I don’t think anybody is ready to see him go anywhere, but at the same point, I’m hearing a lot of people excited at the notion that Mayor Pete would actually be putting South Bend on the national map."

Buttigieg is reportedly considering a run for chair of the Democratic National Committee.

Politico quoted the mayor Thursday night in saying he’d step down as the city’s leader if he ran and won the chairmanship.

“I don’t see how you can do two things at once,” Buttigieg said in the piece.

The report also mentioned the mayor said he’ll be making his decision within the next 10 days.

So, what if he ran and won?

“What would occur is, Mayor Pete would basically say, ‘I will be resigning as of this date,’” Critchlow said. “And then, within 30 days of that date, the party, by law, has to hold a caucus. People would be able to submit their names for consideration…and then basically, you just have a vote of those precinct committee chairmen of South Bend on who’s going to move forward.”

Critchlow said the mayor’s comment about stepping down if he were to run and win follows a growing trend many Democrats support.

“Whoever it is, they feel like that person should step down from all their other responsibilities and duties and focus on being DNC chairman full time,” Critchlow said. “So, it’s really not a surprise that Mayor Pete would make that statement, as that’s what all the other candidates are sort of saying as well.”

If Buttigieg decides to run, but doesn’t win, will his supporters here in South Bend be upset he tried to leave?

“I’m not really hearing that from people,” Critchlow said. “And I’ve really had my ear open for it. And I think people are sort of looking at it through the lens as like, hey, Pete Buttigieg is a pretty impressive guy, of course people are looking at him across the country, and of course he’s giving them his ear and giving them his consideration. So, I’m really not hearing a lot of backlash at this point. Could there be some? Perhaps.”

When asked if Buttigieg running and winning would leave Democrats here in South Bend in a bind, Critchlow said his team has strong leadership to move forward.

He said they would focus on finding a successor for Buttigieg who could continue pushing the agenda he has set.

There are currently five people running for DNC chair. The winner will be elected in late February by the Democratic Party.

Critchlow said where Buttigieg is from and who he represents is part of what makes him appealing.

“He comes from a red area of the country,” Critchlow said. “He’s got Republican supporters, he’s got Democratic supporters, Independent supporters. I think he really brings that cross-political spectrum appeal to the role.”

For now, though, the future is uncertain.

“I don’t know what he’s gonna do,” Critchlow said. “I don’t know what conversations he’s having. I mean, he keeps me updated on what’s going on, but I don’t ask him specifics. I expect that I’ll find out shortly around the same time as everyone else does if he’s gonna run or not. What his chances are? I don’t know. But I think Mayor Pete’s definitely the kind of guy that the DNC needs.”