Caitlyn Kahlenbeck continues to improve, going back to work soon 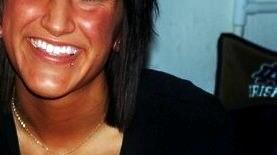 MISHAWAKA, Ind. - Shelly Kahlenbeck said that Caitlyn continues to recover after she was injured during the Indiana State Fair collapse.

Shelly said that Caitlyn is not ready to talk just yet about what happened, for one, because it's too painful still and the family is in the middle of a lawsuit over the tragedy.

The 21-year-old suffered serious injuries because of the stage collapse. Shelly said that her back was broken in seven places and she suffered a closed head injury.

Shelly said that Caitlyn is expecting to go back to work in the next couple of months. She also said it was too early to tell if she will have life-long complications from her injuries.

The Kahlenbeck's say they are a private family that has been shaken by all the media attention. Shelly was upset by the negative comments posted on the Internet about her daughter and other victims of the tragedy that say the victim's are trying to benefit financially.

The stage came down during a strong wind gust right before Sugarland was to take the stage on August 13th.

Kalhlenbeck was one of 58 people injured, 7 people were killed.

The state set a 5 million dollar cap to be used for the victims.

Several families, including the Kahlenbeck's have filed their own lawsuit.

Shelly said that after the lawsuit ends and once thins settle down perhaps then Caitlyn will be ready to come forward and share her story.