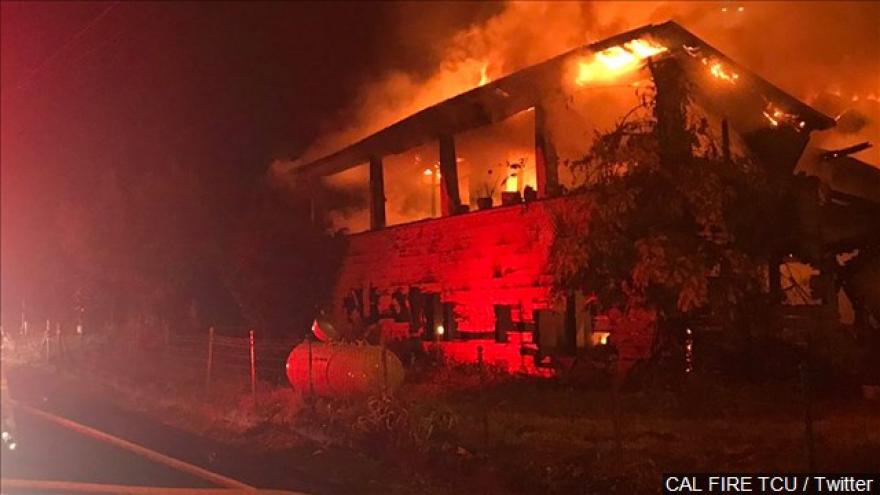 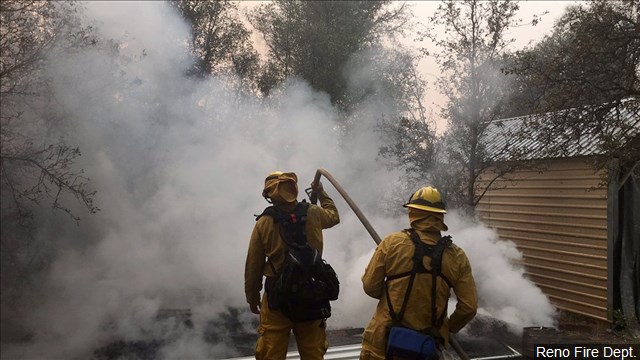 (CNN) -- The flames are spreading fast, the firefighters are stretched thin and the blazes rampaging through Northern California's wine country are nowhere near containment.

As the cluster of fires that has killed 23 people burns, officials ordered residents in some additional areas to get their bags ready in case they need to evacuate.

At least 285 people are still missing in a blaze that has affected almost the entire community. And as sleep-deprived, soot-covered firefighters work to contain the wildfires, some of their homes are being devastated as well.

Pierre Birebent has made wine at Signorello Estate in Napa Valley for 20 years. The blaze gutted buildings at the popular winery, leaving charred remains strewn across the landscape.

"I want to cry. I'm trying not to," Birebent said.

He pointed at piles of ash and rubble. "This was my file cabinet. The door was here ... there's nothing left," he said.

A few steps away, the winery's barrel room is intact, along with its vintages from last year.

Gusts had died down early this week, but on Wednesday they blew between 20 and 40 mph and conditions were still extremely dry, with low humidity and no rain. Similar conditions are forecast for Thursday.

More than 20,000 people had been ordered to evacuate as of Wednesday, and authorities encouraged others to pack "ready-to-go bags" with documents and medication in case they had to flee the fast-spreading flames on a moment's notice.

• At least 23 people killed -- 13 of those in the Tubbs wildfire in Sonoma County, officials said

• At least 285 people are still missing in Sonoma County, according to the sheriff. Authorities believe communications issues are preventing many of the missing from checking in with relatives.

• The entire city of Calistoga is under a mandatory evacuation order, along with parts of Geyserville.

The largest fires were in Northern California's Sonoma, Napa and Mendocino counties, filling the picturesque landscape of the state's wine country with charred rubble and clouds of smoke.

Among the dead was a couple who relatives said had known each other for nearly 90 years: Charles Rippey, 100, and his wife, Sara, 98.

They died shortly after the largest fire started Sunday night, engulfing their home near the Silverado Country Club north of Napa.

In addition to those killed, hundreds are still missing.

Derek Southard has been worried about his 71-year-old father, Daniel, since Sunday. The two live in Santa Rosa, California, but the son was at a wedding in Monterey when the fire hit their neighborhood.

"I had been texting him that day at the wedding. I told him I'm call him that night. And then he never called me back," Southard told CNN in tears. "He texted me at midnight and asked if I was having fun at the wedding. I guess the fire came an hour or two after that."

When Derek Southard got back to Santa Rosa on Monday, the neighborhood was still closed off. He called the sheriff and asked him to go have a look.

"The sheriff said his house was burned to the ground and his car was melted in the driveway, but I've still got my fingers crossed that he made it out somehow," he wrote on Facebook Tuesday.

Derek talked to his next-door neighbors, who told him that they barely got out. In the scramble to escape, they weren't able to knock on his dad's door, they said.

A large part of Santa Rosa was evacuated. In the city's Coffey Park neighborhood, homes are in ruins -- the fire consumed everything that wasn't steel, concrete or brick. At some properties, all that is recognizable are the remains of washers, dryers and water heaters.

Heather Nappi, 33, lived in the neighborhood for three years, along with her husband, Robert, who works for the Rancho Adobe Fire Protection District. Their house was destroyed.

"It was a wonderful home to us," she said. "We had our daughter there. We decorated our nursery there. It's got a lot of memories in it for the short amount of time that we've been there."

When she fled the fire, she forgot her wedding ring.

Her husband has recovered lost items for other fire victims in the past, she said. She hopes he can help find her ring.