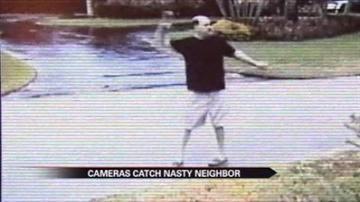 MIAMI -- One Miami neighborhood is sleeping a little better now that a "neighbor from hell" has finally been caught on camera.

A neighbor in a Miami would terrorize everyone he lived around until one day they had enough.

Neighbors, fed up with the man's antics, put up $70-thousand dollar security system and caught him terrorizing them. He was caught throwing nails on their yard and eggs at their home.

"He mentioned to me before that he has a contract on my head and that is what I want to
say because eventually something is going to happen to me," said fed up neighbor Francisco Torres.

The man was arrested on criminal mischief and stalking charges but did not show up for court.

His lawyer says he was recovering from a hospital stay but neighbors say their cameras caught him doing yard work the same day.