Can jurors be fair? Test jury held for Rovenstine trial to find out 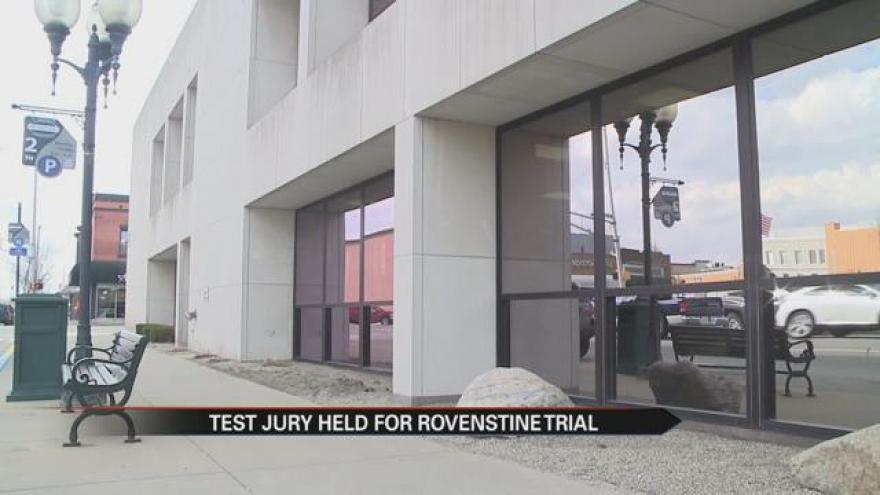 Forty Kosciusko County residents spent their Friday morning in court, answering questions about where they get their news, and if they're familiar with the Aaron Rovenstine case.  It was a test jury, for both the judge and the attorneys to see if a fair trial was possible in the place where Rovenstine serves as sheriff.

Special Prosecutor Nelson Chipman says, he would prefer to have jurors from outside Kosciusko County be a part of Rovenstine's trial. During their questioning, they found that there was a decently high percentage of people who said they were familiar with both the family and the well-publicized arrest.

One juror even admitted that everyone in the county was talking about this case.

Rovenstine is facing ten felonies, including bribery, official misconduct, and intimidation.  In order to make sure the trial can take place without bias or partiality, there was a special process today.

The group of forty residents were split up into three panels. Each panel was questioned individually by both the defense and the prosecution. They were largely asked questions regarding where they get their news, how familiar they are with the case, and if they know Rovenstine or his family personally.

Chipman says asking about their news habits is critical.

"Our system of justice is founded on that the decision of guilt or innocence is made in the courtroom, through the evidence and witness testimony," he says. "Not whats talked about out here, not on social media, not in newspaper, not on your TV camera."

That's important, especially in a tight knit community like Warsaw.

Both sides believed that could sway the trial, especially the numbers Chipman recounted during his closing arguments.

The last panel believed they could be fair and just. Still, Chipman believes the numbers prove his point.

"That's a significant number of people that made the conclusion based on facts or what they've read," he says.

Although Rovenstine's attorney told the judge it was unfair not to have Rovenstine tried by a jury of his peers who live in Kosciusko County, they'll be read, for what Chipman says will be a difficult undertaking.

Mark Soto's attorney was also in court today, although Soto was not present. The judge granted him a motion of continuance, meaning that his trial will be pushed back to a to be determined date.