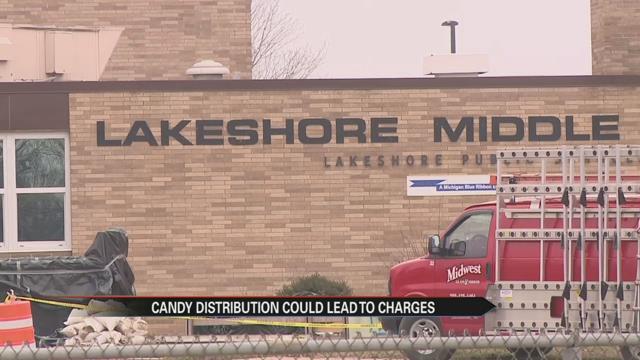 A Lakeshore Middle School student could face criminal charges for distributing candy in class. School officials said the candy was originally believed to be laced with drugs. But once police tested the wrappers, no drugs were detected, according to Lincoln Charter Township Police Chief Dan Sullivan.

On Friday school officials received information that a small group of students had consumed the candy.

Freeman said, “You know I don’t even want to put pretend. This was passed off as if there were really drugs in this and students took them assuming that there were drugs in it. That to me is very scary.”

Freeman said one of the students who consumed the candy believed it was just a mint before another student let on that it may be more.

Freeman said, “One of those students passed a piece of candy off to a student who was not aware that the candy was allegedly laced with drugs and unwittingly ate the candy.”

The parents of the students were called and at least one student went to get a medical examination after feeling sick from the candy.

Freeman said, “We had no indication that any of the other students got sick.”

As police investigate, Freeman wants other parents to know this is a serious situation and he hopes parents will be aware.

Freeman said, “This does open up an opportunity for us to talk again to our students and we’re asking our parents as well to have these conversations with your students about the hazards of drugs.”

Freeman said originally there were Facebook posts that said the candy was laced with poison. He said police did not detect poison on the candy wrapper either.

Sullivan said they are investigating. Police will hand over their findings to the prosecutor because the distributor of the candy could face charges.