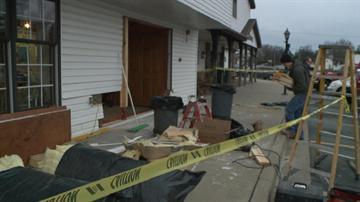 MIDDLEBURY, Ind. – Workers at Das Dutchman Essenhaus got the surprise of a lifetime Thursday evening.

"We've been open for 40 years, and never had this happen," Jeff Miller, Operations Manager, said.

No one was injured after the driver of a car came barreling through the restaurant's wall just after four o'clock.

But the loud crash was enough to send some employees running for their safety.

"All of a sudden, I just heard glass breaking," Charlotte Bontrager, a cashier, said. "I've never heard a sound like that before."

Witnesses said an older woman accidental hit the gas pedal, and roared into the gift shop.

The crash was enough to close off part of the building until crews boarded up the outside.

"It didn't hit anything major like pipes," Miller said. "It was a clean break, so no major damage like that."

Essenhaus employees were still able to serve customers after the wreck; many of them thankful that the building is still standing.

"This is a big part of the community," Bontrager said. "It would've been a big loss."

"Hopefully, it's more than just a restaurant. It's important to the community," Miller said.

"We obviously employ a lot of people here, and we wouldn't want anything where we couldn't employ people, so we're glad it's not going to affect anything like that."