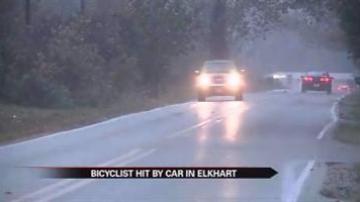 ELKHART COUNTY, Ind. --  A 17-year-old is in critical condition Friday night after he was hit by a car on his bicycle while riding on County Road 16.

Fish said he ran to his window and could not believe what he saw.

“I saw a person lying down in the middle of the road,” said Fish.

That person was 17-year-old Darrien Lewis.

According to police he was riding his bike with his brother in the middle of County Road 16 going eastbound when he was rear-ended by a car.

Lewis was thrown into the street and the car kept going.

Donald Schaffer lives down the street and he said the teenagers were wearing dark-colored clothing and not easy to see.

“I saw two bicyclists from the west going east driving in the middle of the road and I thought how stupid,” said Donald Schaffer.

Fish said the 50 MPH speed limit has always made  this road dangerous, especially for someone riding a bicycle.

“There have been a number of wrecks, there are some crosses down there where people have died and gone into the river and killed down there,” said Schaffer.

Police are still investigating the crash, so far the driver isn’t facing any charges.

AT&T won’t be out to fix the telephone pole until Monday.