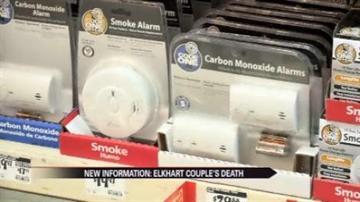 ELKHART, Ind. -- Police are still investigating the deaths of two 28-year-old Elkhart residents who were found deceased in their home Thursday. Police suspect they may have died of carbon monoxide poisoning.

"It kind of makes me think when was the last time I changed my batteries,” said neighbor Luke Neeley.

They were found unresponsive in their bedroom.

A family member told ABC 57 that he didn't think they had a detector or else they would have woken up.

Neighbors down the street say it’s just not worth the risk.

"I mean you never know. There could be something wrong with your heater. You just never know so you have to be prepared for that kind of stuff,” said neighbor Emily Jackson.

Jackson says as a mother, installing detectors was a top priority when she moved into her new home.

"We need to spread the word on it. People just need to be more aware and concerned for their family's safety,” said Jackson.

She says there can never be too many reminders

Carbon Monoxide safety tips
-Place a detector on every level of your home outside of sleeping areas.

-Check the battery once a month, most need replaced every seven years

-Save money by buying a combination smoke and carbon monoxide detector.

If you can’t afford one, many local fire stations will give you a detector free of charge if you call and express a need.

Carbon monoxide poisoning symptoms are often similar to food poisoning or the flu.

It's lethal enough to kill a person after 1 to 3 minutes of exposure.