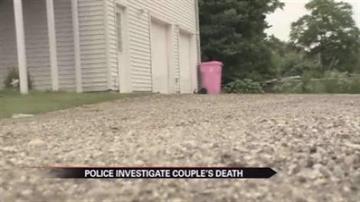 ELKHART, Ind.-- A young couple, both just twenty-eight-years-old, were found dead inside their home in Elkhart Thursday afternoon. ABC57 talked with family members and neighbors who are in a state of shock.

Police found twenty-eight-year old Mitchell Rider and his girlfriend Jamie Hooker inside their home on Shore Avenue in Elkhart.

Paramedics were called to the home just before one Thursday afternoon. A family member says the couple was found in their bed and unresponsive.

"They'd been together about a year. You know young couple, new place," said Rucker.

Family members are already cleaning out items from the home the couple shared, as neighbors watch in shock of how this all occurred.

"Car was left running. The garage is right under the house so again tragic accident," said Rucker. "I don't know any more details than that."

The next-door neighbors described the couple as fun, young and say they were just out and about the other day. They say Jamie loved animals and the couple had a few birds and two puppies. Mitch tinkered on cars and rode mopeds through the neighborhood regularly.

Family says they're certain this was an accident.

"She was just too happy with what she was doing with her animals," said Rucker. "The two birds were like her kids. I mean, they talked- they talked up a storm."

Police do say all signs point to carbon monoxide poisoning at this time, but the Elkhart county sheriff's department says a final ruling on the cause of death is still under investigation.