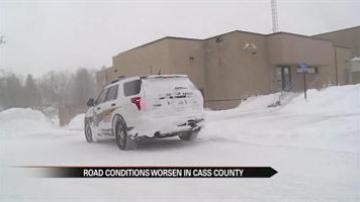 CASS COUNTY, Mich. -- The Cass County emergency dispatch center was busy Monday with calls from drivers who were stranded in the snow. The county wants drivers to stay off the roads.

"Don't go out on the roads if you don't have to, that's the most important thing," said David Smith, Cass County Emergency Management Coordinator.

Smith says the snow emergency is not something people should take lightly.

Officials say if you have to venture out, make sure you have a full tank of gas -

"With the extreme conditions if they happen to get stranded on a road, it may be hours before we're able to get to them," said Smith.

The most dangerous part of the drive is the blowing snow that makes it nearly impossible to see.

As it gets later and darker, things are only expected to get worse in Cass County.

Cass County's emergency is extended through Tuesday morning. Conditions will be reevaluated at noon.