Cass County farmers help one of their own 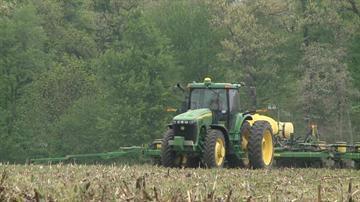 DOWAGIAC, Mich. -- More than two dozen Cass County farmers came to the aid of a hospital-ridden farmer. Ben Waldschmidt of Dowagiac recently had triple bypass heart surgery, leaving his two sons without the extra help during Spring planting season. His neighbors and fellow farmers helped him out, so he wouldn't fall behind.

"In our neighborhood, everybody knows each other," said Kevin Waldschmidt.

Recently, his father Ben underwent heart surgery, leaving him and his brother without a helping hand during Spring planting season.

"From a farmer's standpoint, it's definitely a bad time of the year," Waldschmidt said. "The harvest and planting seasons are the two busiest times of the year for us."

So when his neighbors and fellow farmers found out, they came rushing.

The Waldschmidts have more than 700 acres to tend to, so the extra help meant everything to the family.

"Without the help that we're getting today, it would probably be a three to four week process for me and my brother to get everything into the ground."

Because of their generosity, his family's harvest will be right on schedule, making him happier than a pig in mud.

"Today is just a statement that when somebody goes down, there's a bunch of friends willing to help out."