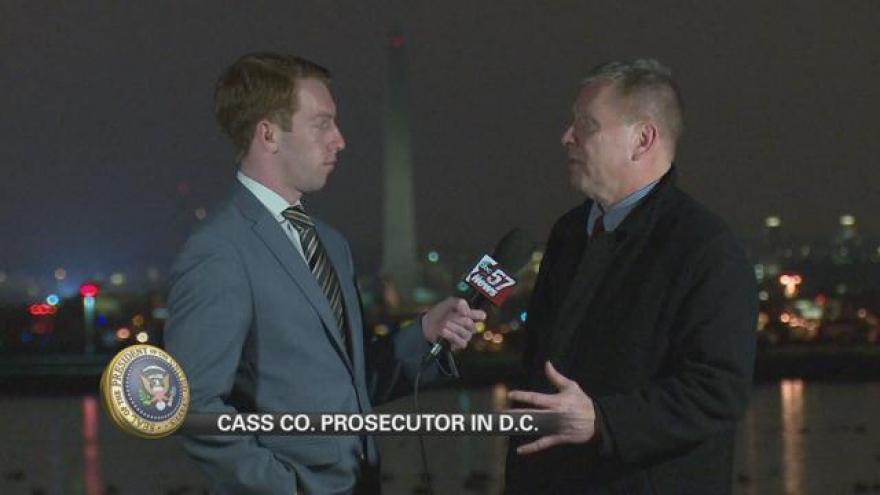 A lot of Michiana leaders were in Washington during the presidential inauguration including Cass County Prosecutor Victor Fitz who drove overnight to be there.

Victor Fitz is a committed republican who put in a lot of time and effort to help get Donald Trump elected. On top of being the Cass County Prosecutor, he was an attorney for the Michigan Republican Party during the recount and he’s Chair of the Michigan GOP’s sixth district.

“We won! And it was nice to see Donald Trump up there and I thought he gave a gracious speech. It was typical Donald Trump,” said Victor Fitz, Cass County Prosecutor.

Victor Fitz is in our nation’s capitol to celebrate not only Donald Trump and Mike Pence’s victory, but the fact that all six counties in his Michigan district voted for them.

“What’s the secret? What code did you guys crack to flip the state and to get such an overwhelming win?”

“He [TRUMP] tapped into the populist movement, a lot of Reagan type of crossovers from the Democratic Party. He also recognized on the Democratic side that there wasn’t a lot of enthusiasm for Hillary Clinton, so he knew that if he worked hard, that he’d get good results, and he did,” said Fitz.

Michigan went for the New York billionaire, but not without some controversy. We caught up with Fitz on recount day for Cass and Berrien counties. Thousands of ballots sorted by hand, nearly identical results.

“It was a terrible waste of resources and Jill Stein should be ashamed of what she did,” said Fitz.

But that’s now the past and Fitz is in Washington to celebrate the present and future telling ABC57 News that this stood out to him during the inauguration.

“You know, I think it really was just before Donald Trump gave his speech and you heard the crowds starting to chant his name, they wanted to hear from him. And I heard that many times during the campaign, but it was usually kind of a stressful situation where you wondered what was going to happen next. And this was just a chant of relief. And so, we’re very, very proud that he won. We want him to be the president for everyone,” said Fitz.

Prosecutor Fitz also mentioned how excited he is that Michigan GOP Chair Ronna Romney is now the new chair of the Republican National Committee. This is the first inauguration he’s attended and he’s in good company with fellow Michiana leaders and groups who were also there.