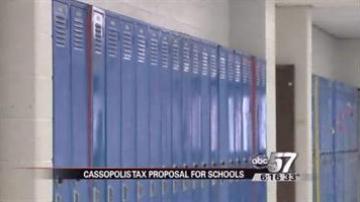 CASSOPOLIS, Mich.--With the primary just around the corner, voters have a lot of issues to consider!

In Cassopolis one of the big ticket items is whether to renew a school tax that’s been in place for about 30 years.

Voting for the tax would keep property taxes at the current rate and voting against it would lower taxes!

The money from the taxes is being redirected to improve and maintain the public schools here in Cassopolis.

All of that money would be put into maintaining the schools and fixing some of the wear and tear in the older buildings.

"One of the things we heard when we went after the $16 million for our new Sam Adams elementary building is just, are you going to keep it up?” said Gregory Weatherspoon, the current Superintendent of Cassopolis schools. “Well, this [tax] answers that question. We'll be able to keep it up because it'll generate about $300,000 a year. That would take care of our needs as you use a building."

Because the elementary school is a brand new facility, the majority of the tax money would be put into the high school- where it is desperately needed.

The school's only sign is the one on the side of the building, the other sign was so damaged over the years it had to be removed.

Inside the building, students use the same lockers the school had when it was built 36 years ago and the principal told ABC 57 about 20% of them are unusable!

Other problems include inoperable chemical safety showers in the science labs, and bathrooms that aren't up to code!

Some of the bathrooms don’t even have doors on the stalls.

"A lot of the stuff we have in this building is original equipment and it was 1976 when it originally opened,” said Tracy Hertsel, the principal at Cassopolis High School and future superintendent of the school district. “I happened to be one of the first students in this building. I was a freshman in 1976 and, so, anything that's 35 to 36 years old, it gets to a point where it needs to be repaired."

Weatherspoon said the taxes are less than 1% and would continue for the next 10 years.