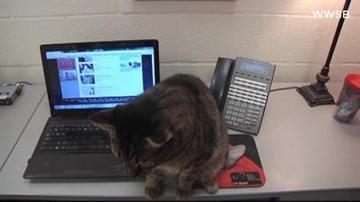 SARASOTA, Fla. (CNN) --  A cat at a Sarasota, Florida animal rescue somehow managed to dial 9-1-1. It caused a bit of confusion for everyone involved.

"I think this probably ranks right up there with probably one of the craziest things that has happened here," said Lynn Racies of the Cat Depot.

On Monday afternoon, 9-1-1 received a call from Cat Depot. There was no one on the line.

A minute later, the dispatcher called the number back.

Dispatcher: We just got a call at 911 from this phone. Does someone there have an emergency?

Cat Depot: I don't think so, let me check, this is Cat Depot.

Racies was just returning from lunch.

"Terry, who works for me, noticed my extension was lit, knowing I was not in the office thought, well that's odd, came into my office to check and found Zeke lying by the phone with the phone off the hook, sprawled across the key pad on the phone," said Racies.

That's when she put two and two together.

This isn't the first time the 3-year-old feline has been a bit mischievous.

"He has been known to press buttons on the phone before. He has hung up on my callers when I'm talking. He has pressed the buttons and dialed an outside line," said Racies.