Cat tased and beaten with a baseball bat 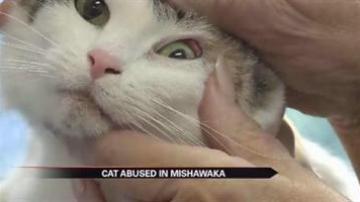 MISHAWAKA, Ind. --  Police are investigating a serious case of animal abuse in Mishawaka.  Officers say Saturday a woman tased her cat and then beat it with a baseball bat, but they are not hauling that woman off to jail just yet.

Five-year-old Pixie is still pretty sore and terrified after being severely abused by her owner.

"A woman was beating her cat with a bat and also shocking it with a taser," said St. Joseph County Humane Society Dr. Carol Ecker.

Police told Dr. Carol Ecker who is treating the feline that the owner was trying to kill the cat.

But because of the owner's mental issues, she was not arrested for beating poor Pixie, instead she was institutionalized.

The woman was mentally challenged and she ended up having an episode and she has been taken to a situation where she will be cared for," said Ecker.

Luckily Pixie's injuries were not life-threatening.

"She had a red eye and she is really sore all over her back," said Ecker.

Ecker said she feels for the woman, but she feels worse for poor Pixie, who she has been nursing back to health.

"With someone with mental issues, sometimes it is hard.  I would suggest they do not let this woman have anymore animals or be around small children.  To me this is just she came unglued.  This happens, but these animals should not have to suffer through this," said Ecker.

There have been four animal abuse cases in the past two weeks.