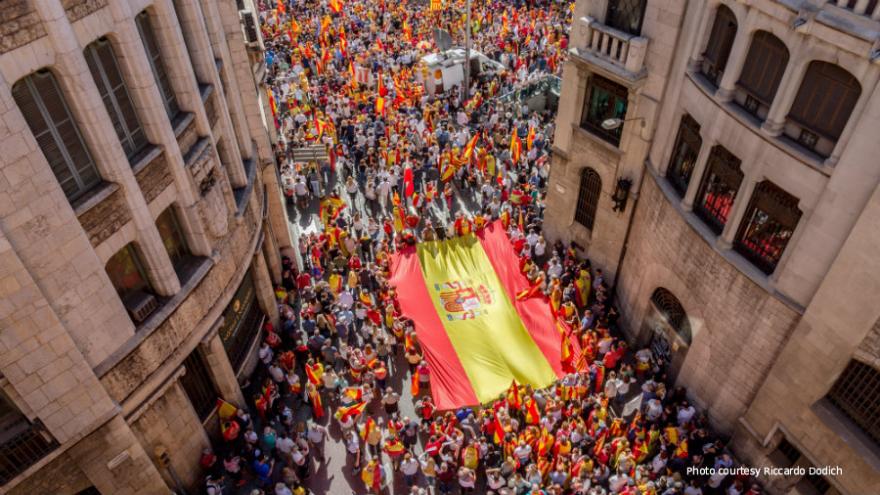 (CNN) -- Spain faces a week of deep political uncertainty as the secessionist leader of Catalonia considers whether to make a unilateral declaration of independence, against the backdrop of a bitter standoff with the central government in Madrid.

Catalan President Carles Puigdemont had been expected to make a formal declaration at a specially convened session of the Catalan parliament on Tuesday.

But there was intense speculation on Monday about whether Puigdemont would go ahead with such a provocative move -- particularly in the light of a huge rally against independence in Barcelona at the weekend that exposed deep misgivings about his tactics among some sections of Catalan society.

The French government said on Monday that it would not recognize an independent Catalonia, and that independence would result in automatic expulsion from the European Union.

In an interview with the French TV station CNews, Nathalie Loiseau, France's minister of European affairs, said any declaration of independence would leave Catalonia isolated. "If independence were to be recognized -- which is not something that's being discussed -- the most immediate consequence would be that (Catalonia) automatically left the European Union," she said.

Spanish Prime Minister Mariano Rajoy said he was determined to prevent a breakaway by the northeastern province, which is the powerhouse of the Spanish economy, in the wake of a banned referendum on October 1.

"Spain will not be divided, and the national unity will be preserved. To this end we will employ all the means we have within the law. It is up to the government to make decisions, and to do so at the right moment," Rajoy said in an interview with German newspaper Die Welt on Monday.

"We have listened to many people. I believe we know what Spaniards think, and they should know that the government, too, is clear about what it has to do," he said.

Spanish Deputy Prime Minister Soraya Sáenz de Santamaría said in an interview on Spanish radio that the government would invoke powers to take control of the regional government if Catalonia went ahead and declared independence.

Barcelona Mayor Ada Colau, however, urged the government to refrain from invoking the never-before-used Article 155, which allows Madrid to take over autonomous regions.

"Escalation will not benefit anyone," she said, urging both sides to begin dialogue with each other and for Rajoy to "be responsible and listen to the people," and to roll back the police force that was dispatched to the region ahead of the vote.

Colau said Spain was amid its "worst institutional crisis since democracy began" and said Spain's political representatives should "find a solution that is inclusive and up to standards we have been living."

The stakes are high for both Spain and Europe if Catalonia chooses to break away.

Catalonia accounts for nearly a fifth of Spain's economy, and leads all regions in producing 25% of the country's exports, CNNMoney reports. It contributes much more in taxes (21% of the country's total) than it gets back from the central government.

The prospect of an independent Catalonia has already prompted two major banks and some other businesses to move their registered headquarters to other parts of Spain.

There is more at stake for Madrid than losing wealth. The country has 17 regions with varying degrees of autonomy, and losing one may inspire others to begin, or revive, separatist movements.

But there are many other unanswered questions, including continued membership in the European Union.

If forced to apply independently for EU membership, Catalonia would have to convince all of the bloc's current members, including Spain, to agree.

And if Catalonia became an independent state, it would not automatically be a World Trade Organization member, so would likely face stiff trade barriers that would hurt its economy.

Protests on both sides

Between 250,000 and 400,000 anti-independence Catalans, and supporters from the rest of Spain, marched through the streets of Barcelona on Sunday to protest any moves for a breakaway state, following a divisive and controversial referendum on October 1 that found a majority of Catalan voters in favor of independence.

But the result was not as decisive as it appeared -- turnout was only 43%.

Members of Puigdemont's Popular Unity Candidacy party had threatened to meet in Parliament on Monday anyway, in an act of defiance, but it is unclear if they will.

A Catalan Parliament spokesperson told CNN that a new session had been called for Tuesday at 6 p.m. (12:00 p.m. ET), in which Puigdemont is expected to update members on the "current political situation."

The address could be the moment when Catalonia's leader declares that the region will break away.

PROFILE: Catalan president has 'independence at his core'

"Many people believe -- and he seems to be moving in that direction -- that he will use this opportunity to declare, or to announce the results of the referendum which, as far as he was concerned, were overwhelmingly in favor of independence," Dominic Thomas, chair of the department of French and francophone studies at the University of California Los Angeles, told CNN.

Whatever happens this week, it's clear that there are deep divisions over the issue, not only between Madrid and Barcelona, but within Catalonia as well.

In an indication of the deep divisions the referendum has caused, those who marched in Barcelona on Sunday in support of remaining part of Spain argued there was no reason they couldn't be both Catalan and Spanish.

But protesters have also marched in favor of independence since the October 1 vote, claiming that the Catalans have a distinct culture from the rest of Spain and that they contribute more to the economy than the other regions.

Thomas says that the "powerful" show of support for unity means that a declaration of independence may not be well received.

"Many people stayed home and didn't vote (Sunday) so the whole question of the mandate that he would have in speaking before that Parliament and declaring independence would be challenged.

"The turnout in Barcelona and across Spain to talk about Spain and unity and to express the voice of those who would not want this referendum to go ahead was also overwhelmingly powerful."

Divisions between Catalan leaders and the central government took a particularly brutal form on the day of the vote, when thousands of Spanish police went to Catalonia to try to shut the referendum down and clashed with protesters and voters.

Images of police firing rubber bullets, restraining elderly people and pulling voters from polling booths by the hair have shocked people around the world. Hundreds were injured.

Despite the outrage, Rajoy and Spanish King Felipe VI defended the police and doubled down on their stance to take whatever measures necessary to keep Catalonia from seceding.

Rajoy was forced to apologize on Friday, but many in Catalan say the crackdown has only fueled their desire for independence.

"I didn't feel that repressed until what happened on October 1," said 25-year-old student Mireya Jimenez.

"I think that whatever they do, they have made us angry, and I think we have seen that a ... part of Spain doesn't like us -- the king doesn't like us either and so I think that, also because of how they've treated us just now, there is no turning back."