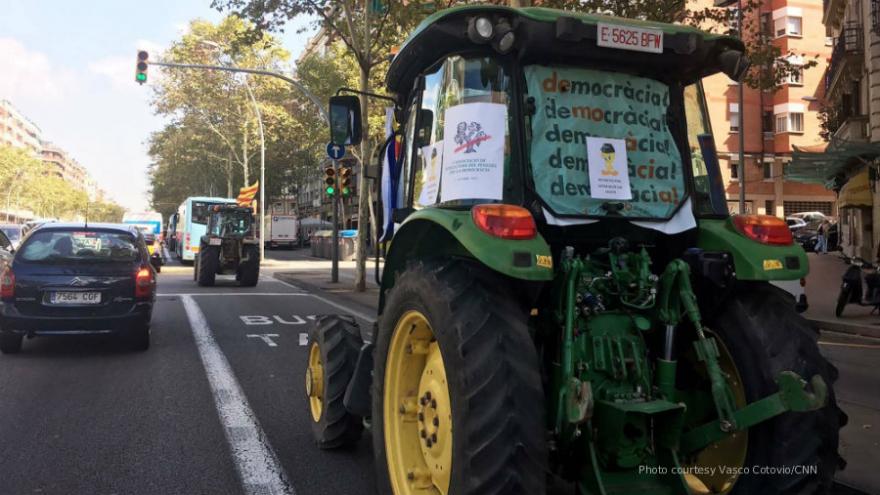 (CNN) -- Spain is facing a political and constitutional crisis after Catalans voted in favor of independence in a contested referendum that descended into chaos when police launched a widespread and violent crackdown.

The Catalan government said it had earned the right to split from Spain after results showed 90% of those who voted were in favor of a split.

But amid an unexpectedly harsh response from Spanish police, turnout was only around 42%. The Catalan health ministry said 893 people were injured in the clashes Sunday as riot police raided polling stations, dragged away voters and fired rubber bullets.

The Catalan President Carles Puigdemont denounced the police crackdown as the worst violence Catalonia had seen since the military dictatorship of Francisco Franco, and demanded the withdrawal of Spanish national forces from the region.

The UN High Commissioner for Human Rights, Zeid Ra'ad Al Hussein, called for "independent and impartial investigations into all acts of violence" around the independence referendum, and asked the Spanish government to allow UN human rights experts to visit.

"Police responses must at all times be proportionate and necessary," he said in a statement. "I firmly believe that the current situation should be resolved through political dialogue, with full respect for democratic freedoms," he added.

Trade unions in Catalonia called a strike and a mass demonstration for Tuesday, an action likely to test public support for the Catalan government in the aftermath of Sunday's chaos.

The Spanish government of Mariano Rajoy said it was discussing its response with opposition parties in Madrid.

All eyes were on the Catalan government as it considered its next move. Under the referendum legislation passed by the Catalan parliament, the regional government has 48 hours after the result is finalized to declare independence from Spain. Final votes were still being counted Monday.

The Catalan President stopped short of declaring independence from Spain Monday -- a move that would further deepen the crisis. But Puigdemont called for an international arbiter to mediate the crisis, ideally the European Union. "This moment needs mediation," he said. "We only received violence and repression as an answer."

Puigdemont said Catalonia did not want a "traumatic break" with Madrid. "We want a new understanding with the Spanish state," he said.

If the Catalan government unilaterally declared independence from Spain, Rajoy could suspend the President and take over the running of the province. Such a move would inflame tensions considerably and would likely be a last resort for Rajoy.

Several thousand people gathered outside Barcelona's town hall Tuesday morning where the executive of the autonomous Catalan government was meeting.

People shouted "Long live free Catalonia, we are peaceful people and we only want to vote."

Catalan officials called on the EU to step in. "Today Europe has to choose, shame or dignity. Violence or democracy, this is our demand," the Catalan Minister of Foreign Affairs Raül Romeva said.

But the EU backed Madrid. The European Commission, the European Unions's executive body, said the vote was illegal. "We call on all relevant players to now move very swiftly from confrontation to dialogue. Violence can never be an instrument in politics," the commission said in a statement posted on Twitter.

It said it trusted Rajoy "to manage difficult process" in respect of the Spanish constitution.

Rajoy has said the vote was illegitimate. "At this point, I can tell you very clearly: Today a self-determination referendum in Catalonia didn't happen," he said in a televised speech Sunday night.

Of 2.2 million ballots counted, about 90% were in favor of independence, Catalan government spokesman Jordi Turull told a news conference shortly after midnight. Turnout was about 42% of the 5.3 million eligible voters, authorities said later Monday.

Turull said more people would have voted had it not been for the Spanish police suppression. Up to 770,000 votes were lost as a result of the crackdowns at polling stations, the Catalan government estimated.

Spain's national government in Madrid has ardently resisted separation. In the runup to the vote, national authorities seized ballot papers, voter lists and campaign material. Thousands of extra national police were sent to the region and high-ranking Catalan officials involved in organizing the referendum were arrested.

Pablo Guillen Alvarez, an economist and ‎associate professor at the University of Sydney, told CNN that the violent scenes could lead to more support for Catalan independence.

While sympathy in the press and on social media lies with the Catalans, hard-right supporters of the Spanish government put Madrid under a lot of pressure to show strength, he said.

"The Catalan question has been boiling for 150-200 years. It's a no-go, red line for the Spanish right.

"(The government) reacted in only way that they could have."

The UK's Foreign Ministry said the referendum was a matter for the Spanish government and its people.

"We want to see Spanish law and the Spanish constitution respected and the rule of law upheld. Spain is a close ally and a good friend, whose strength and unity matters to us," it said in a statement.