Cause of Pottawattamie Resort fire released 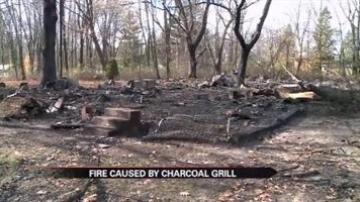 BERRIEN COUNTY, Mich. – Fire investigators have determined the cause of the devastating fire at the historic Pottawattamie Resort in Coloma Township.

The fire broke out Sunday night on Arbor Avenue.

The fire has been ruled an accident.

Investigators say the fire started in Cabin 4 where a charcoal grill was burning. Winds caused the fire to spread.

Frames of doors, cars and mattresses are all that's left after fire ripped through Pottawattamie Resort.

"I was making dinner we heard screaming outside we ran out and the back porch of cabin 4 was engulfed in flames,” said Erica Friedman, the property manager.

Friedman is the property manager of the resort and lived there.

Now her walls are caved in and covered in black soot.

When she saw flames Sunday night she ran to the main office to call 911.

Ten fire departments responded just after 6 p.m. and fought the flames as they spread in the 40 mph winds.

It was a toxic combination of high winds, dry leaves, and the older construction of the cabins that fueled the fire.

Crews had a hard time getting enough water to put out the 50-foot flames.

"They had a hard time keeping up with water supply I know they had dropped pumps into the pool to try to use pool water,” said Friedman.

After more than seven hours, crews cleared the scene.

ABC 57 talked with the owner and he said he is hoping to rebuild.

One firefighter was taken to the hospital Sunday night, but was later released.