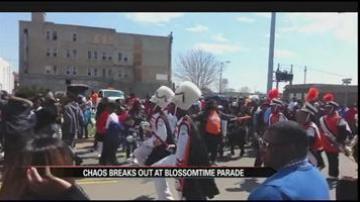 BENTON HARBOR, Mich. -- A riot broke out at the end of Saturday's Blossomtime Festival parade in Benton Harbor. Parents of students in the Benton Harbor High School marching band are outraged. They want to know where security was and who dropped the ball.

Parents say as soon as the kids crossed over from St. Joseph into Benton Harbor, things got out of control very fast.

"I panicked, I panicked, I'm like wait, wait, wait! They were grabbing at the kids, they were pulling them, throwing them. It shouldn't have happened like that," said parent Cheree Mayfield.

Mayfield says for the Benton Harbor Tigers, a day that started as a dream come true, quickly became a nightmare.

Mayfield says the crowd in Benton Harbor was out of control.

"Parents were being punched, kicked, hit. I want you to stop for a moment and you be that 14 year old or 15 year old child," said Francis Kemp, the assistant band treasurer.

Kemp has just one question for police.

"You've got power, why did you choose not to use it?" said Kemp.

After seeing the cell phone video, we met up with Mayor James Hightower. He says he is already working to make sure band members are safe next year.

"I did speak with superintendent Dr. Seawood coming up with a strategy for next year utilizing school security," said Hightower.

Moving forward, the school is going to take security into their own hands.

Berrien County Sheriff L. Paul Bailey says Benton Harbor Police were in charge of that stretch of the parade. He says nothing came over the radio about a fight or chaos. He said he had officers ready to help.