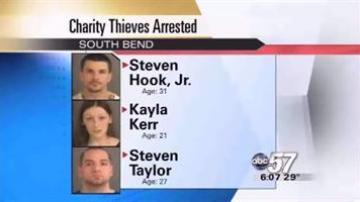 SOUTH BEND, Ind. -- Charges were filed against the three people on Thursday who are accused of stealing money meant for sick kids from local Walmarts.

Taylor told police he relapsed into drug addiction and robbed the stores with Kerr and Hook.

In some cases, he claimed they just stole cigarettes.

In others, he says they stole money to pay off drug dealers.