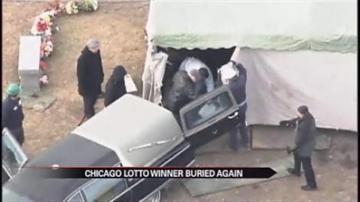 Chicago's famous lotto winner has been laid to rest, again.

The body of a Chicago man was scheduled to be buried again Monday. He was poisoned just one day after winning nearly half a million dollars.

Police found cyanide in his blood sample. That prompted a investigation into his death.

His body was exhumed this past Friday so an autopsy could be performed.