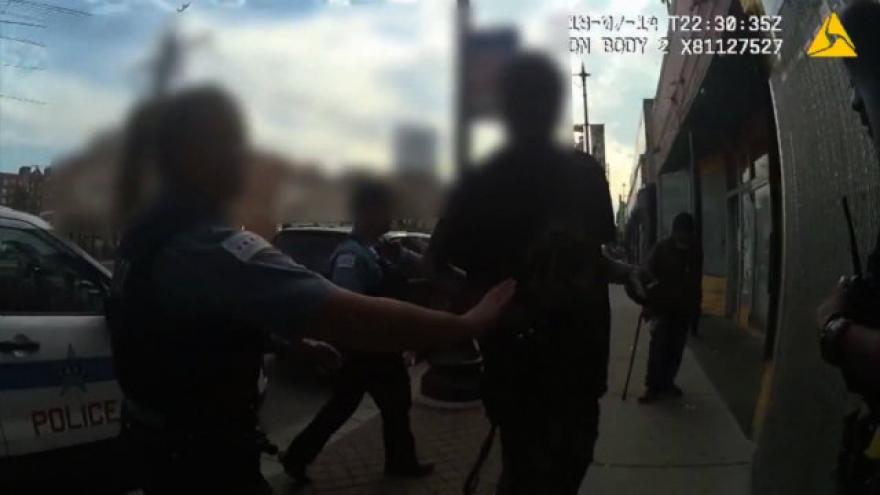 (CNN) -- The man Chicago police shot and killed Saturday appeared to be reaching for a gun in his waistband, according to body camera footage released by the department on Sunday.

Chicago police released two versions of the same video. One of the versions showed the events in real time and the other was in slow motion. Both versions showed four officers approaching Harith Augustus, 37. In the video, officers try to grab Augustus, who pushes the officers' arms away and flails his arms. Augustus then rolls over the hood of a police vehicle and appears to reach to the right side of his waistband, where police say they saw a gun.

Neither of the videos has sound, said Superintendent of Police Eddie T. Johnson, because the first 30 seconds of audio buffers as soon as the videos are activated. Johnson also said the video has been edited to zoom in, freeze and slow down on key parts (like showing the waistband).

"Last night was a very difficult situation for everyone involved. On one hand we had a loss of life, which no matter the circumstances is always tragic," Johnson said during a Sunday news conference. "On the other hand, this is a very difficult position for the police officers in our community."

Augustus was shot and taken to a hospital, where he was pronounced dead. Police recovered a weapon at the scene, but the slain man did not fire his gun at officers, Waller said.

Asked if the man had a permit to carry a concealed weapon, Waller said, "As we know right now, he did not." On Sunday, Johnson confirmed that Augustus did not have a conceal carry permit.

The release of the body camera footage comes after heated protests on Saturday. Johnson said he decided to release the video on Sunday because "the community needs answers and they need them now."

Residents had asked for more police presence in the area where the shooting took place, Waller said.

But as news of Augustus' death spread, protesters took to the streets Saturday night. Some threw rocks and bottles at police. One protester could be seen stomping on the hood of a police car.

Some people hurled words instead of objects at police.

"Who do you protect? Who do you serve?" protesters shouted.

Officers will be temporarily reassigned

The city's Civilian Office of Police Accountability, or COPA, said it is committed to a thorough, objective and unbiased investigation of the shooting. It asked for the public's patience and cooperation.

"I understand and empathize with the community's concerns and want to assure the public that we are committed to conducting a fair, thorough, impartial and objective investigation," Sydney Roberts, COPA chief administrator.

"I am asking the community for patience and cooperation to give COPA the opportunity to do the job we are tasked to do, to conduct our investigation and render a finding based exclusively upon the facts. The loss of life is always tragic no matter the circumstances and our condolences are with the family."

The officers involved will be placed on routine administrative duties for 30 days, authorities said.

Augustus' death is the latest officer-involved shooting that sparked protests in Chicago.