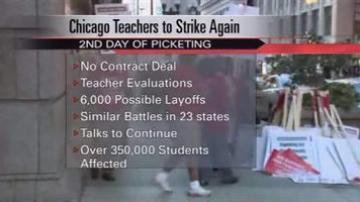 CHICAGO -- For a second straight day, Parents of nearly 400,000 students are waking up and scrambling to make plans for their kids.

The school board's new plan would partly base the evaluations on how well their students score on standardized testing.

As many as 6,000 teachers could lose their jobs under the plan.

Now across the nation, all eyes are on the school system and what will happen since there are similar battles over testing in districts in at least 23 states.

Pay is still an issue on the table as well, but the union said it's close to an agreement with school officials. The offer includes a 16 percent raise over the next four years.

The average Chicago teachers make is nearly $75,000 a year.