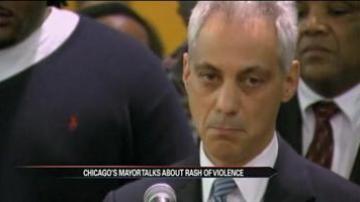 CHICAGO -- Chicago's Mayor Rahm Emanuel is speaking out about the seemingly non-stop rash of violence in the city that he says is killing the children of Chicago.

The city's police superintendent said it was a bloody holiday weekend with dozens of shootings that left eight people dead.

It was the second weekend in a row at least 36 people were shot and the mayor said addressing the violence is one of his top priorities.

"There's nothing harder to do than to reach out and wrap your arms around a mother, a mother and a father who lost a child to senseless, meaningless violence," said Mayor Emanuel.

The police superintendent says the vast majority of shootings in the windy city are gang-related.